The monastery hadn’t looked that far away on the map, but now, my boots thick with mud and my pony refusing to take a step further, it felt like it might as well be half the world away.

“You’d need a blinking dragon just to get up there,” I found myself muttering to the rangy, stubborn steed that my older brother Rik had sworn was the best of the bunch, and would take me all the way to the Draconis Monastery without slipping a shoe. This, like most of the other things that fell from out of my older brother’s mouth, I knew to be a lie, but something in me had felt sympathy for the tough little pony.

You and me both are pretty unwanted, huh? I had thought at the time, and in return for my compassion, so far, the small mountain pony had kicked, bucked, bit, and balked at every boulder and hill and river on the week-long journey between the fortifications of the Torvald Clan and Mount Hammal. That was where the Draconis Monastery sat, and where I had been sent by my father, Clan Chief Malos Torvald.

But at least every movement I coaxed out of this pony got me nearer to my goal—not just the monastery itself, but to finding the information my father had supposedly sent me here to gather. That’s what I kept telling myself, anyway, as I pulled at the pony’s reins, and it took a halting step forward before stopping yet again. In all likelihood, my father had sent me here just to get me out of the way—the unlucky, unloved, illegitimate son that I was. The valley that I was laboring through was little more than a mountain ravine, tall rocky walls on either side, dripping with ferns and the constant rivulets of ice-melt from the mountain above. Why on earth had I ever decided to come this way? But I knew why. Ravines meant water, and I’d hoped to find a pleasant stream with low banks—an easy fjord to cross. Instead, on either side of the fast-flowing water was just heavy silt and mud. The light was green-tinged and shadowed by the overhanging vines and trees above, but through a gap in the undergrowth I could make out the slopes of Mount Hammal rising higher and higher, the trees thinning and being replaced with scattered patches of frost and snow – and there, sticking out from the top, the dark stone walls of the Draconis Monastery itself, impossibly small and toy-like.

Like the wooden forts and soldiers that my brothers were always playing with, I thought. It was hard to imagine that up there, on top of the world and so close to the cold and clear sky anyone could make a life, and certainly not monks in robes.

“And certainly not me, either!”

The Draconis Monastery was the last place I wanted to be. I should be at my father’s side, like his other sons, learning how to be a warlord, learning how to lead our clan. But no. I was being sent to the middle of nowhere on a fool’s errand, to be locked away and forgotten, most likely. I kicked at the mud in frustration, but with a sucking schloop all that I succeeded in achieving was removing my boot from my cotton leggings, and sending it sploshing across the gully.

“Great. Absolutely great!” I wanted to shout, but instead I kept my voice low. I’d already made enough noise and to be honest, I was slightly concerned about the fact that there were supposed to be dragons up on the mountain somewhere. Right now, I couldn’t decide just what was worse: being eaten by a dragon in the middle of nowhere or spending the next few years of my life freezing my fingers off as a ward of the Draconis Monastery. At least a dragon might be more interested in my pony than in me?

The sound that traveled over the watery glops and gloops all around me was sharp-edged and sudden.

It must just be a branch falling somewhere, I thought as I retrieved my dripping wet boot and bending to put it back on. It was freezing, and I knew that I would be lucky if I didn’t end up getting a cold from this.

“We should never have come this way at all,” I muttered to the pony, that had now stopped moving and was instead standing almost stock still but for a faint tremor running through his body.

“What have you seen, girl?” I whispered, turning my head to follow the direction of her pointing ears and flaring nostrils.

Thump-crack. This time, the sound was heavier as well as sharp, like something dragging itself across a rock, or claw or a scaled body…

“Easy now, easy there.” The hairs on the back of my neck stood up as I slowly straightened. Dragons weren’t supposed to eat people anymore. Not the dragons of the Middle Kingdom anyway, were they? The Old Queen negotiated with them to stop doing that, and my father had said it was rumored the Draconis Monks could control dragons. But so far, every market and crossroads inn between here and the Torvald Clan lands had been filled with stories of people who had lost sheep, cows, or goats, of distant farmhouses seen burnt out on the edge of the wilds. What was to stop a hungry dragon from eating a solitary sixteen-year-old boy and his horse if it was hungry, no matter what some dead queen or some bookish monk had said? I bit my lip in worry (a habit that my dad said made me look weak), my hand moving to my belt for the sword that should be there.

Oh no. I’d left it still wrapped and tied beside my saddle, along with the shield, helmet, and anything else that I could possibly use to help defend myself.

“Pssst! Stamper, Stamper come here!” I hissed at the rangy pony using the name that I had optimistically given it when we had set out (aside from ‘you mule’ and ‘no, please don’t do that!’).

Stamper’s eyes rolled white and he leapt and spun, yanking the reins from my hand as he bolted away from the sound, clattering up the shallower side of the mountain gulley as if he hadn’t been stuck at all. “Stamper, no!” I shouted, but it was no good. The pony was gone, carrying my saddle, blankets, warm clothes, food, and most important of all – all of my armaments. If whatever was making that noise was as terrifying as Stamper seemed to think it was, I was going to need my weapons. My heart was hammering in my chest as I crouched, bunching my hands in front of me as if to do…what? What was I going to do to a dragon, or a bear, or whatever was up there?

“Just keep it together, Torvald…” I tried to tell myself, breathing out through my nose. “You are a son of Torvald. You are strong.” After not hearing anything for several long moments (including any sign of Stamper) my heart slowed, and I turned to splosh out of the mud, scraping and climbing up the bank behind the pony. At least I’m only a little way away, I grumbled to myself. I might be able to make it up to the monastery above me without that stupid horse… I had only just got my fingers to the top of the wooded incline when the source of the previous scraping, thumping, and snapping noise became abundantly clear.

Four men were creeping and climbing their way up the stony bank by the side of the river gulley, and from the look on their faces and the weapons in their fists they had clearly only one intention in mind, and it didn’t look good for me.

Oh no… My heart hammered in my chest. I thought that I had managed to make it all the way to Mount Hammal without encountering any bandits or rogues on the road. It looked like I had been wrong.

Before I had time to recall the many contingency plans I’d brainstormed in the event I encountered trouble on my journey, the nearest man jumped at me, bringing his hatchet downwards in a terrible blow.

Will Niell survive the day, let alone make it to the monastery? Who are his attackers? And will stubborn Stamper ever obey?!

Find out in Dragon God! 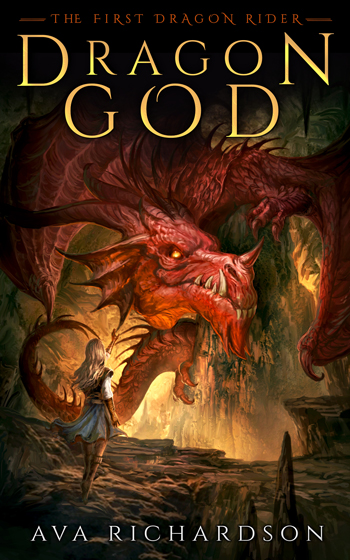 The new world is calling.

Niell Torvald is desperate to prove himself—his father’s warlord kingdom depends on him. When a vicious attack on the way to the Draconis Order monastery nearly kills him, it becomes clear that grave trials await him on this path. Joreth, the wise monk who saves his life, advises caution upon entering the sacred halls. His mission is to learn arcane magic from the monks that will help to cement his father’s power, but Niell will need more than magical arts alone to navigate the challenges before him.

Among the monks’ students, Niell meets the lovely and mysterious Char, who senses evil deep within the ranks of the Draconis Order’s members. She takes him to a dragon she has raised, Paxala, and the three of them become fast friends. Niell soon grows in strength as he and his fellow students gain ancient knowledge, and his closeness to Char blossoms into something more.

But when Niell’s brothers grow impatient and attack the monastery in a bid to seize power, he will have to decide where his loyalties lie: with his warlord father’s domain, or the new friends he has made in the wider world.